33 in stock (can be backordered)

33 in stock (can be backordered)

You Stand on the Brink

The populous supported rebels have seized support in the rural regions, and are threatening to move onto the cities… and then the capital. Can you lead the rebels to victory, or suppress the rebellion? 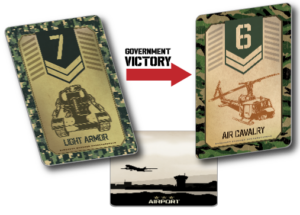 A bitter fight is ahead

From the resource rich oil fields in the west, to the palace gates in the east, every square inch of your country is being fought for. Each turn a new location card is revealed and players must select one of their available military units to attempt and capture the territory. The victor takes the territory and the units are placed in the discard pile, and will not be used again.

If players select matching forces, the military units are discarded and a new territory card is added to the one already on the field. Players will continue to fight over the territory until one player wins.

Who will the international community recognize?

After all units have been exhausted, players will add up the value of the territory they captured and the player with the higher total is victorious!

The location cards form a lovingly designed single panorama of your nation. From the rich oil fields in the east follow the mountains down into the valley where the hub of ocean and air transportation connect directly to the palace in the west.

This panorama is for sale as an NFT on OpenSea.

Strong prey on the weak

The Coup was styled in the design of modern revolutions, and does not represent any specific country. The government you’re overthrowing could be democratic or autocratic. It could be wealthy, it could be poor. It could be ruled by a President, Prime Minister, Sultan, Warlord, Comrade, King, or Queen. It’s up to you to decide.

Since 2018, The Coup has been exclusively available from The Game Crafter. As of December 2021, The Coup is no longer for sale as a print-on-demand title and is instead available directly through our store.