After far too long, Landing Party is finally landing! 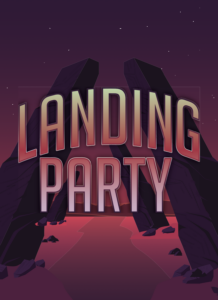 We are officially putting Landing Party on sale, starting today, October 8th. This push-your-luck game is a wonderful quick entry game for players with enough tension to keep players guessing, but a very low barrier to entry to help encourage people to give it a try.

Landing Party took a lot of inspiration from a lot of places. The core-mechanics, the artwork, even the alien concepts are all a culmination and a blending of a number of our fandoms all wrapped up into one compact package.

The art is inspired by the amazing artwork of Adam Reed and Mike Thompson. There is no direct connection/agreement between us and them, and we’ve been careful not to use their artwork directly. We just love the style, and really thought it captured a look that played well with the bright colors of the cards themselves.

A special thanks also goes out to Cloud 9, the core push-your-luck mechanic is based on their roll-and-pass design. After being introduced to Cloud 9, it really helped us fill the gap on what was missing in our mechanics and we appreciate the inspiration.