Thrice comes in a can!

It was put there by a man …named Mike Rogers.

Thrice is a portable dice drafting game, made to be played solo or with your best-friend! In Thrice players take turns rolling a pair of dice, the player who rolled selects a die to place on their card and gives the remaining die to their friend. 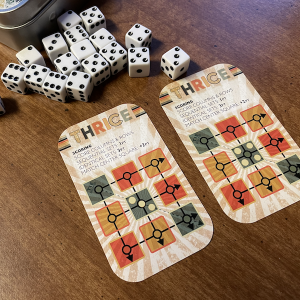 Monkey in the middle

The center block has a pip value indicated on it. If you play a die matching that pip value, a scoring column or row running through the center earns two additional points each. Once all the scores are tabulated, if players have tied, count the number of pips on the dice running diagonally -> the player with the most pips wins! If there’s still a tie, play a gain!

We can’t all be winners

Thrice was submitted to the Game Crafters ‘Solo Duo Challenge’. While we didn’t make it out of the preliminary round, we were encouraged by the feedback we received, and we’re going to be making Thrice a print-on-demand exclusive. Available exclusively through The Game Crafter, Thrice will not see a full publication at this time.

Isn’t that kinda a bummer?

Yes, and no. While we’re open to publishing Thrice in the future if we get enough interest (tin can printing is the biggest hurdle), Mike is already hard at work on a competitive version of Thrice, tentatively named ‘Thrice: Battles”