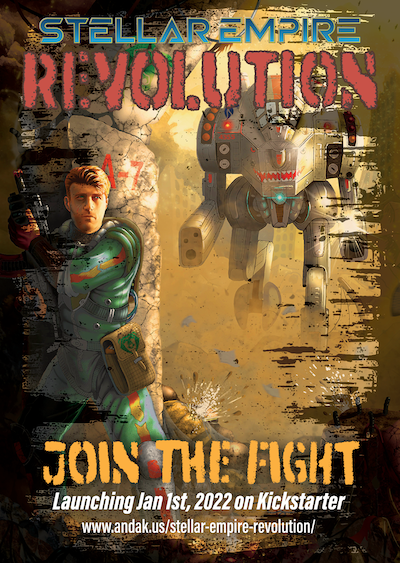 The Republic on the Brink

In Stellar Empire Revolution, two players take on the roles of the Rogers Republic and the liberation movement, the Ma’tens Junta. Each side must utilize their leaders in a variety of social and military actions to secure the planet Astachill.

The rag-tag group of freedom fighters must struggle against the overwhelming might of the Rogers Republic, pushing the opinion of the population closer to independence. To succeed takes guile and planning where your influence is most important.

For the Republic, dropping a hammer from the sky is only one option. Winning the hearts and minds of the population will go a long way in ensuring a lasting Republic presence on Astachill.

A number of options are available to the technologically superior Rogers Republic – including nerve gas.
It’s just a matter of how far they’re willing to go…

You win and lose by your leaders

In Stellar Empire Revolution, in order to take an action, you must utilize one of your dwindling supply of leaders. These leaders may be crucial in time of a battle, but their ability to rally the population cannot be overlooked. Using a leader, makes them unavailable until you’ve used all of your leaders. But be careful, both sides are on the lookout to capture and interrogate a leader of an opposing army. 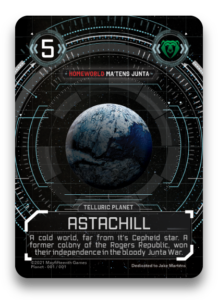 Located on the far end of the Republic, the humanoid natives of Astachill have long adapted to the cold and have grown accustomed to a tough life. Three generations ago, the Rogers Republic annexed Astachill and the surrounding systems in accordance with the New Galactic Law authored by the Neupert Prefecture during the Formation Years.

The natives of Astachill, known to themselves as the Ma’tens, revoked the invasion and have never taken their uplifting to interstellar community lightly.

The Fight of the Kings was the first organized revolution against the Republic. The war was short lived, and the royal line (which the Republic had attempted to leave in place to smooth the transition) was eradicated in retribution and to prevent any further attempts at revolution. The Fight of the Kings left a power vacuum filled by individuals, organizations, and criminals – fracturing the Ma’tens into perpetual servitude and domination.

Stellar Empire Revolution centers on the war of independence fought by the Junta. In the official lore of Stellar Empire, the Junta is successful in throwing off the Republic by bringing the people together under the  Junta’s banner, and casting the Republic away once and for all – while building a prosperous unification for their people. Now you have the chance to either follow suit, or carve your own path to victory!