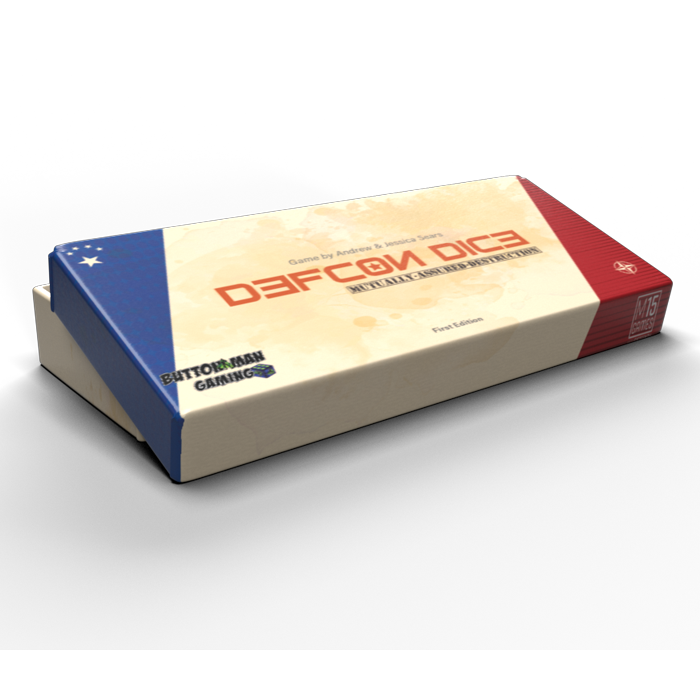 NATO and their allies

Created to add a third- and fourth-player to Defcon Dice, it was popularly requested by fans of the first game wanting to play with a group larger then just two.

Mutually Assured Destruction is identical in card and component count to the base game, and as such can act as a stand-alone game.

A battle royale for dominance

Playing with all four nations allows one of two new game modes; tournament or battle royale.

In tournament play, players eliminate the lowest player after each third round, “who takes their dice and leaves”. This requires more time, and means the final two players will end up playing a total of nine rounds.

Battle royale setup includes removing six of the total twenty-four dice, and after each round the player with the most unclaimed cards is eliminated along with three dice.

Set in the cold war, players take the role of either the NATO pact or the People’s Republic of China. The Cold War backdrop provides the flavor and the design ascetics of the cards, however does not affect the mechanics of the game in anyway.

Just as with the actual Cold War, Defcon Dice has come to an end. When Andak acquired Button Man Gaming’s catalog, we were forced to make some difficult decisions. Defcon Dice required a custom built box and we’ve run out of inventory on the boxes. The last remaining decks are available as-is (with no box).

If you’re looking for one of our dice games, consider Wilderness Dice: Bring Your Own Dice and it’s expansions.