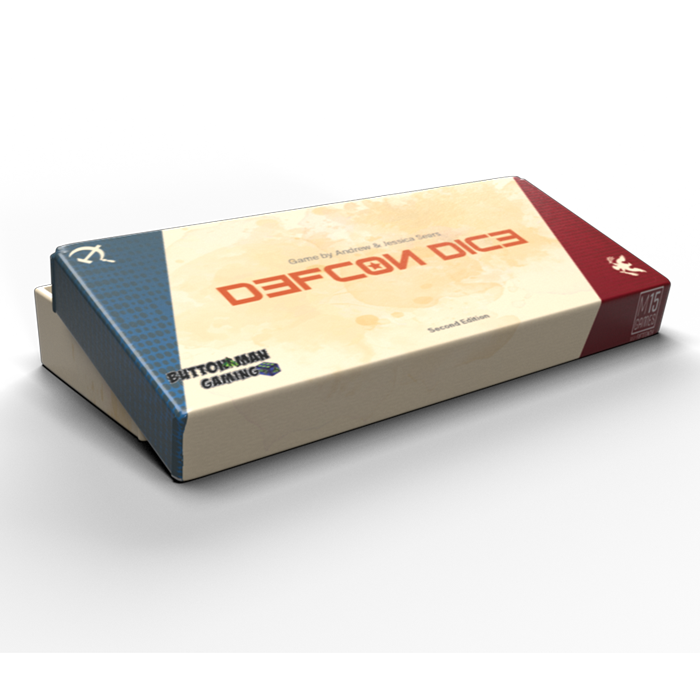 The Eagle vs the Bear

Defcon Dice pits two players in a battle to claim dice before their opponent. Each player has a single action to either claim a die or modify the die. Players must carefully decide when to modify dice, and when to claim them. Players may also sacrifice dice, keeping any player from claiming them.

The game is played in a series of three rounds. The round ends when there are no more dice to claim, either because players claimed them all – or some have been discarded.

Each round players refill their hand back up to six cards, meaning any remaining cards in a players hand hang around until they can eventually claim a die to get rid of them. 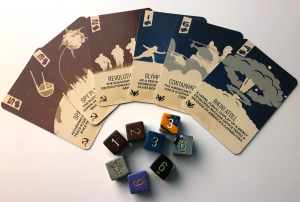 This luck based game has a surprising amount of strategy all wrapped up in a quick fifteen to thirty minute game.

Designed for two players, the expansion that was released allows for up to four players in a battle royale or tournament style game.

Set in the cold war, players will play as either the United States or the Soviet Union. The Cold War backdrop provides the flavor and the design ascetics of the cards, however does not affect the mechanics of the game in anyway.

Just as with the actual Cold War, Defcon Dice has come to an end. When Andak acquired Button Man Gaming’s catalog, we were forced to make some difficult decisions. Defcon Dice required a custom built box and we’ve run out of inventory on the boxes. The last remaining decks are available as-is (with no box).

If you’re looking for one of our dice games, consider Wilderness Dice: Bring Your Own Dice and it’s expansions.