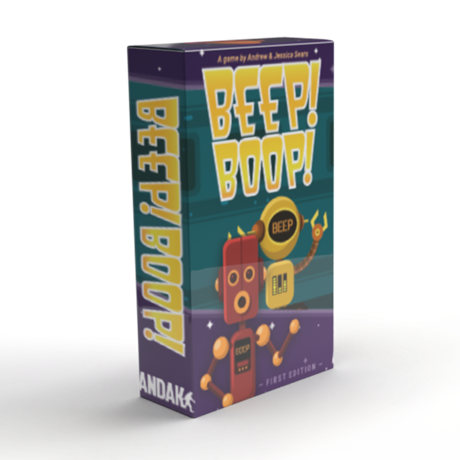 We’ve received a message from beyond the stars. Our robots are being networked and tasked with decoding the transmission.

It’s vital that we discover the meaning of this message, and the first researcher to figure it out will be in for a big promotion. The task is taking all of our available robots, so you’ll be working from the same network, but you need to carefully decide when you’ve learned enough because duplicate work will cause errors!

Can you discover the message first?

Your job is to maximize the robots at your disposal. As in Fortune’s Tower, players must push-their-luck as long as possible, trying to avoid duplicate robots appearing in the row below them. When a matching robot is played, you can perform a ‘hot-swap’ with the face-down card at the top of the pyramid. If the card is different, you may proceed. Failing a hot-swap save, memory storage devices can also be used to protect a row from data corruption.

After each row is played, players will decide if they’ve risked enough and take their success. If players continue they risk losing all progress. After 8 rows have been completed, players start over. Reaching all 8 has the added benefit of filling a complete message segment.

Using our web application, you can play with as many players as you’d like. You can also play with scaling difficulty and ‘costs-of-failure’. We also have a turn/time limit version that forces players to play less conservative and push their luck further. The web application is also available for offline play, however you still need a mobile device.

We’ve made a printable card available online to allow players to play without their mobile phone or web access. We will also upload the card to Board Game Geek.

Beep! Boop! is a competitive push-your-luck game based on Fortune’s Tower